I’ve experimented with this salvage dye in the past, but not with much luck. Now, having tried many more dyestuffs, I’m returning to it.

The idea that you can get good color out of something you would have otherwise just thrown out is appealing and worth pursuing, especially in winter, where dyestuffs are scarcer.

I’ve saved avocado pits and peels in the freezer over a good amount of time. Maybe from 20 fruits in total? I’m not sure, and I forgot to weigh them before I started. Anyway, what I did:

The reason for adding salt is that it should prevent the dyestuff from spoiling during the fermentation time.

I tried the dye bath with 10 g test skeins of supersoft. The first one was a quite dull beige, but the next two progressively darker and more pink in tone. It seems that more color came out of the pits with each round of heating (I’ve seen this before with other dyestuffs, that later rounds with the same color bath actually gave more intense color instead of weaker). I added some ammonia to the washing water of the third skein, and maybe that turned the color more pink. 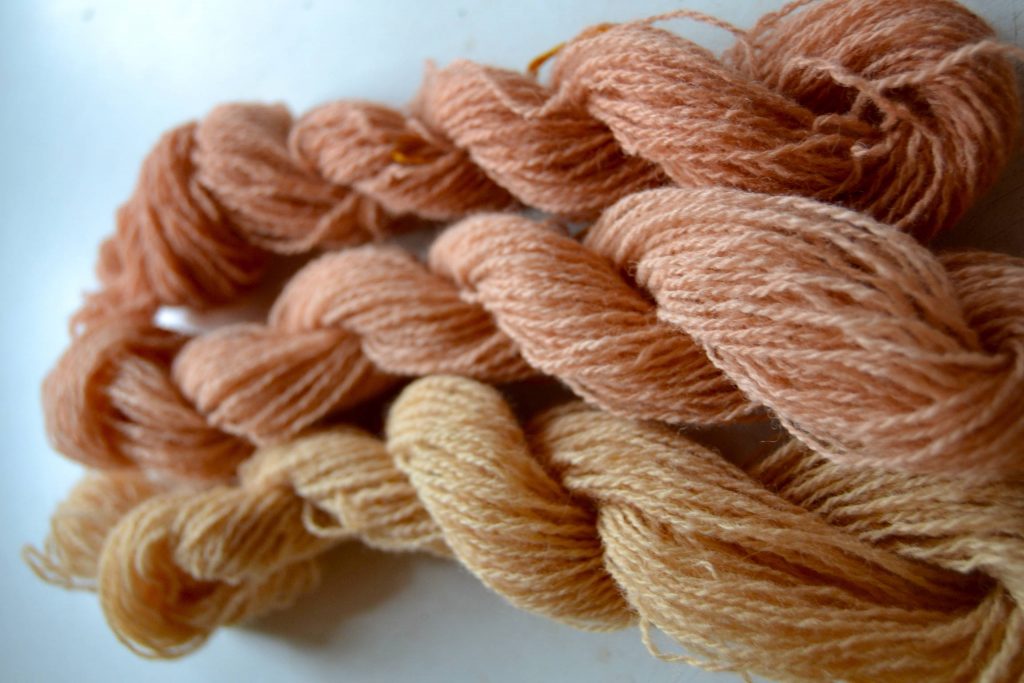 After the 3 test skeins, I bravely threw in two 100-g skeins of sock yarn.

There was still a lot of color left in the pot, but not of the pink kind  – the two skeins came out more to the beige side, in between test skein 1 and 2 in hue. So I didn’t even let them dry, as I’m planning to immediately overdye them – more later on this – and also, more later on the avocado peels (fermenting right now).

Conclusion The pink shades that can be obtained are nice, but some skeins turned out a dull beige

Possible improvements Maybe I should have used rainwater? It is often said that it helps with red shades. I think that using a blender would have helped extract the color better