Trip to Japan – Kyoto, Part One

It’s been a bit quiet here at the blog over the last few weeks, and that’s because we’ve been in Japan on holiday. There are so many impressions to process, but here I’ll just share the ones that have to do with yarn and dyeing. Natural dyeing seems to be quite popular in Japan!

The first stop on our route was a very nice shop/workshop called Tezomeya. They have a full range of cotton clothing, which I really liked. Here’s a quick snapshot of their shop, taken with our small pocket camera so not the best, but just to give an idea: 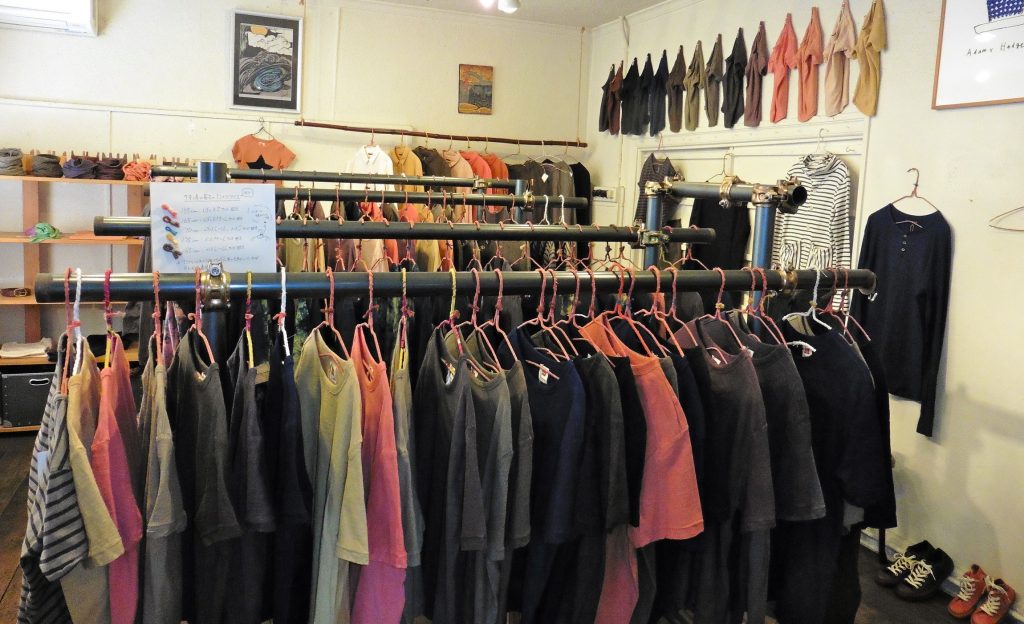 Unfortunately, Japanese clothing sizes are not really made for me, a Dane of just above average height (actually, I tried on a pair of men’s trousers in another shop, and they were about 8 cm too short! The man in the shop commented that my legs were “too long”).

But my mother (who wears a much smaller size than I do) bought two excellent stylish t-shirts in organic cotton, one in a dark indigo, the other dyed with pomegranate.

The dyer (whose name I didn’t catch) was very friendly and showed me what he was up to that day – dyeing with a type of shellfish purple that is used in Japan. This is not the shellfish purple that was used in antiquity, but comes from a form of sea snail that people eat in Japan (raw or like escargots). It contains an inedible part, I’m supposing it’s some kind of gland, and this is the very part that contains a pink/purple dye. Seeing that I was interested in it, they gave me the shell of one of these creatures. Here it is: 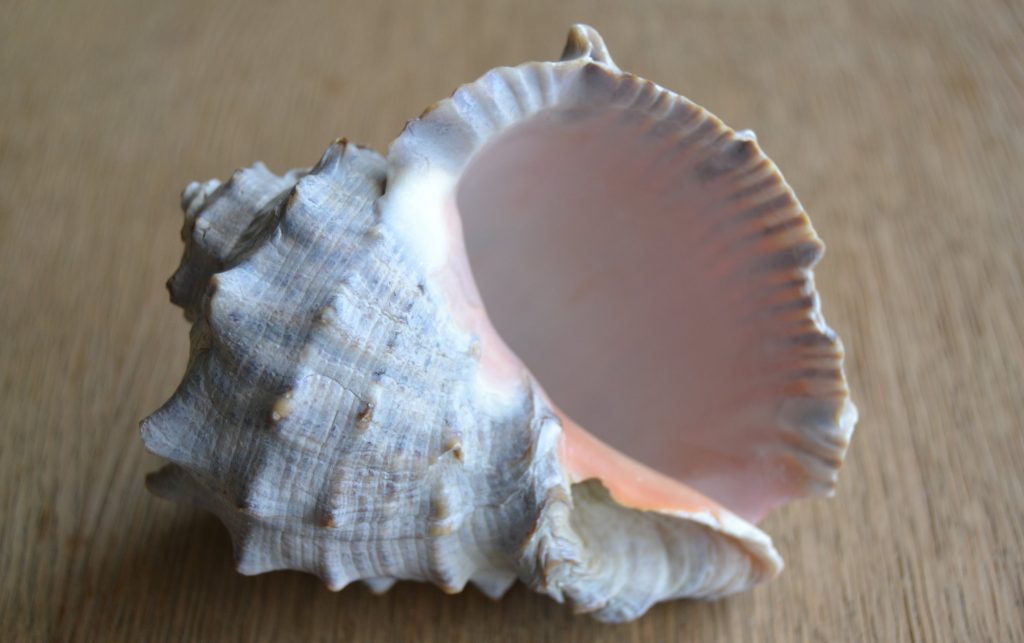 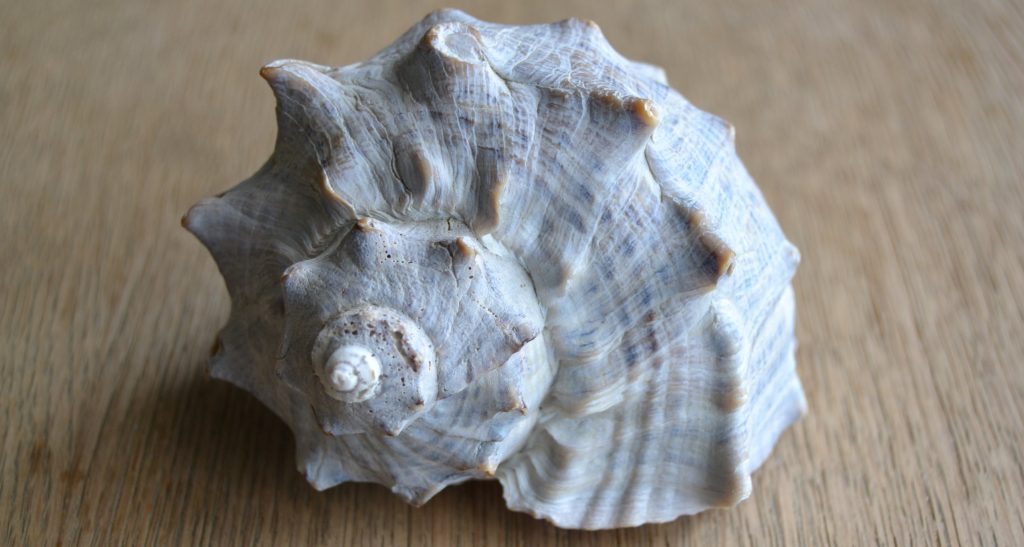 A rather handsome seashell, I think, and quite large – about 12 cm long. Googling a bit about, it seems to me that this could possibly be a dye called akanishi, coming from Papuna venosa. This book about an excavation of an archeological site dating from around year 0, shows a picture of a shell, which to my eye looks a lot like the one I have, and says that “this shell is very common in the sea near [northern Kyushu] while we have found many crushed shells during excavations, which imply the use for purple dye”. Not impossibly far from Kyoto where we were, and 2000 years later, the species could still be a common one – so the story could fit together. But if someone knows more about this, I’d love to hear from you!

In Kyoto, we also went to the very yummy yarn shop Avril. Among other (non-natural dyed) things, I bought a skein of natural colored quite untreated lace weight silk. Here it is, posing along with an “antique” yarn spool from a Takayama “antique”/tourist trap shop. Another spool is still wrapped in its newspaper 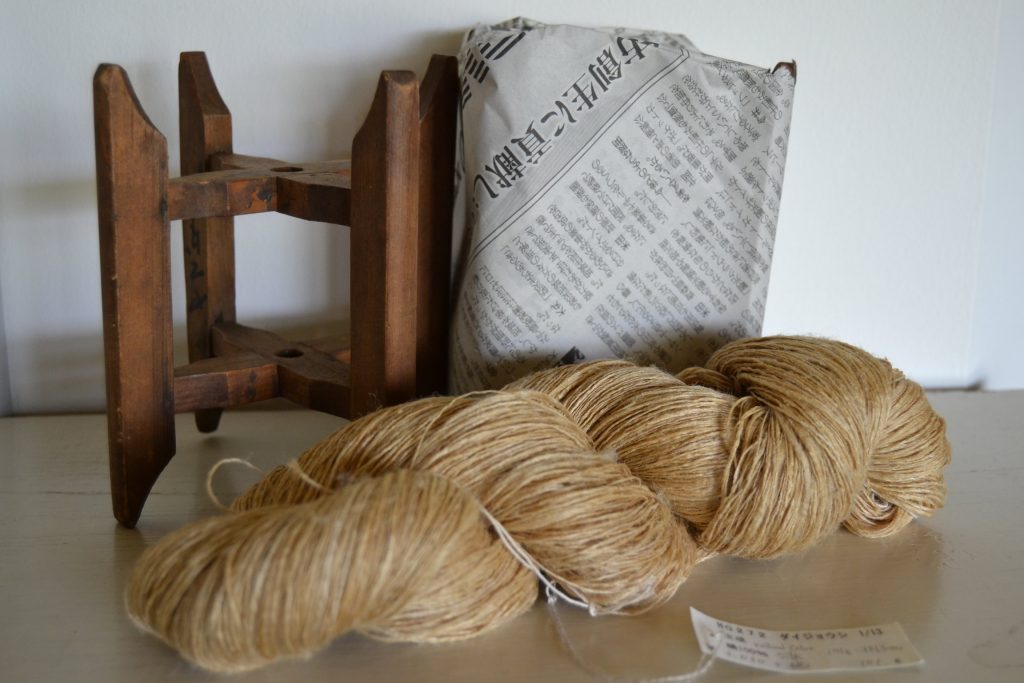 I don’t know yet what I’ll make with this silk, but it seems to somehow beg to be combined with something indigo blue…